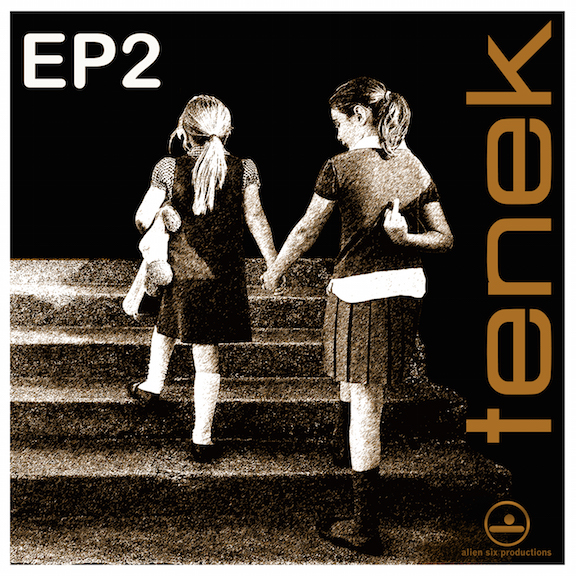 Tenek ‘EP2′ [Digital Re-issue]
Back in 2017, we finally managed to get our back catalogue returned to us from Toffeetones Records who we’d been signed to from 2008 until 2012. Most of our material from that period has now been re-released on all digital platforms. However, my own personal favourite EP has not been available yet so it’s definitely overdue.
EP2 was released in October 2011, 13 months after we’d released our 2nd album ‘On The Wire‘. It was intended to bridge the gap between the 2nd and 3rd albums although it ended up taking a lot longer than it should have done to complete ‘Smoke & Mirrors‘.
The first track was “What Do You Want?” which was written in 2010 and came quite close to being included on ‘On The Wire‘ but we didn’t quite finish the track in time and we felt that we had a pretty strong album already. So the plan was to feature it on the next single or EP. Once this track had been written, it was pretty obvious that some real string parts would be the icing on the cake. Geoff had a friend called Phil Jones who played cello so he came down to the studio in Sussex and laid his parts down, they definitely added to the sound of the track.
We also thought it would be interesting to try and get someone quite well known in the electronic music scene to play on the track. Several names, including Billy Currie, had been mentioned but I decided to contact Chris Payne from the original Gary Numan touring band (1979-90) as I’d met him a few times backstage at gigs and thought he might do it if he liked the song enough. We were delighted when Chris replied that he would be happy to play some violin for us so we sent the track over to his studio in France and within a few weeks Chris had recorded loads of parts for us. Geoff did a sterling job tidying up and editing all the material including the stunning solo that is on the coda of the full-length version. Amusing to note that when Chris was asked about the track in subsequent interviews he referred to me as a ‘jovial nutter’ which I always found hilarious!

As a side note, Chris was also one of the original writers of seminal 80’s hit ‘Fade To Grey‘ which he co-wrote with Billy Currie in the soundchecks of the Gary Numan ‘Touring Principle‘ debut tour in 1979. It was originally called ‘Toot City‘ and was recorded at Martin Rushent’s Genetic Studios in Streatley, Berkshire on the day after the tour ended.
The next track was “Elusive“ which originally started out in demo form as “Alive”. It was one of those songs that you knew was going to be huge when it was completed. Very different from “What Do You Want?” which featured a lot of traditional sounds such as the strings, guitars, and piano parts, “Elusive” was full-on electronic with an anthemic chorus and slick production. It was another one of our tracks that evolved through many versions with subtle changes each time until we finally felt we’d taken it as far as we could. It always used to feature in the live sets, sometimes as an encore, and was a great track to perform on stage. Whereas we didn’t play ‘What Do You Want?‘ quite as often as we felt it didn’t sound quite the same without Chris’s violin parts that are such a feature of the track.

My all-time favourite Tenek song is “The Art of Evasion” from the album ‘On The Wire‘ as I feel it’s a very emotional and heartfelt song which was a rarity for us as many of our tracks are quite difficult to pin down lyrically, even for us! It was a notoriously arduous journey to record the album version, I don’t think I’ve ever been worked so hard on vocals in the studio. I remember feeling totally drained after the sessions. When the album came out, I could never shake the feeling that we hadn’t quite done the song justice even though I still loved it. So when we discussed releasing a new EP I think we both wanted to see if the track could be improved. I think some vocals were redone and a slightly more complimentary arrangement and mix were put together. Finally, I felt we’d done the best version we could and I still prefer the ‘Alternate‘ mix on EP2 to the album version. Plus I think the E-Bow guitar parts are still the best I’ve ever played to this day, it was just one of those magical studio moments that don’t happen very often. So I must say a big thanks to my wife Lisa for buying me the E-Bow several years previously for Christmas!
•    The E-Bow is a battery-powered electronic device for playing a string instrument, most often the electric guitar. The E-Bow uses a pickup in an inductive string driver feedback circuit, including a sensor coil, driver coil, and amplifier, to induce forced string vibrations.
I honestly can’t remember why we chose ‘Higher Ground‘ as the 4th track on EP2, I think it was probably as we’d filmed a video for it at Coalhouse Fort in Essex back in February 2011. We also remixed this track for the EP and it turned out well and fits in nicely with the other tracks, another of my personal favourites from ‘On The Wire‘.
Also included on the EP are 2 radio edits as both “What Do You Want?” and “Elusive” were too long in original form for DJs and podcasters.
As for the artwork, it was decided that we’d go for a picture of my nieces Emma & Louise sitting on some steps in Hove where I lived at the time. We wanted it to suggest that they were wartime refugees (WW2) so the pic was treated to give it a sepia feel. It was taken on an incredibly hot day in the summer so we were incredibly grateful to them both for their patience. It really paid off as I think it’s a stunning cover and a lovely memory of the time as they are both 16 and 19 now! Bernard Ryan did a fantastic job with the retouching on the original artwork and really encapsulated the concept we’d envisioned. Unfortunately, Toffeetones will not let us use any original artwork from that time so Cheri has cleverly adapted the cover for this re-release. We do still have a few copies of the CD with original artwork in our shop but not a huge amount.
We played a lot of gigs in 2011 including a festival in Bucharest in January alongside Project Pitchfork amongst others and it was also the first time that we supported Toyah on a UK tour so overall a great and productive year for the band. It will be great to see this EP back on all digital platforms and I’m hoping it may gain many new listeners who might discover it.
As always, thanks for taking the time to read this blog. It’s very much appreciated!
Best Wishes,
Pete x
**To learn more about the various projects Pete has been involved with (outside of tenek), see below for a list and links! 😉
Peter Steer Projects:
Sinestar
TinGun or click ->HERE
Agency-V or click -> HERE