Background/Info: Geoff Pinckney (The Nine, Alien#Six13) & Peter Steer (mainly known for his work as a producer) are back on track unleashing their 3rd full length to date. Five years have passed since the previous album (cf. “On The Wire”) although the band released several EP’s in the meantime.

Content: Tenek remains to me one of the most underrated electro-pop bands in the scene. “Smoke & Mirrors” only confirms their great writing skills, and...

This latest album from Tenek was three long years in the making. Which, when you listen to the production alone, you can readily believe.

Tenek occupy their own special musical place. There's hints, echoes and traces of...

"Smoke & Mirrors is the 3rd album from Tenek following on from Stateless in 2009 and On The Wire in 2010. The album kicks off with Everything Lost, a bass heavy grower of a track that oozes subtlety whilst still having one of those killer Tenek choruses that you find yourself singing along to. On this track, you know you're on safe familiar ground. A solid start and a good way to reintroduce Tenek after a long absence. 8/10

Next up is Fear For Nothing...

Tenek make a welcome return with their new album "Smoke And Mirrors", the follow up to the 2010 album "On The Wire". 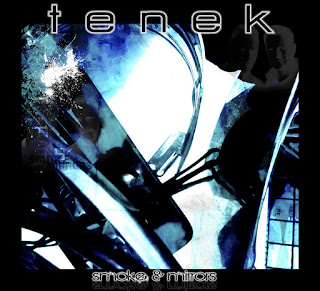 The first thing that is immediately noticeable is how much fuller the sound is, which is down to the fact that some new musicians have joined the "Tenek family". Drummer Steve Clark who's contribution to this album should not be underestimated, in addition on Bass on some of the tracks are Michael Steer, Paul Jackson and Sam Morrison. It definitely adds to the powerful sound of the album.

The opening track "Everything Lost" is...

Tenek - Smoke & MirrorsSince Peter Steer and Geoff Pinckney formed Tenek in 2007, they have built a solid following in the electronic music scene with a hard-driving, synth-driven sound and exceptional songwriting skills. So it’s no surprise that the group’s just-released third album, Smoke & Mirrors, kicks some serious ass.

The latest evolution of Tenek’s signature sound adds guitar and real drums to Pinckney’s enthralling synths and both members’ powerful vocals. These new instruments are perfectly integrated into Tenek’s arrangements, resulting in an anthemic, rock-edged sound...

TEC is pleased to be able to give the advanced lowdown on 'Smoke & Mirrors', the long awaited third opus from tenek. - Written by Chi Ming Lai [November 10, 2015].

It’s been five years since TENEK’s last full length album release ‘On The Wire’, but the duo have now finally released their third opus ‘Smoke & Mirrors’. ‘On The Wire’ signaled a developing maturity after the electro rock anthems of debut ‘Stateless’, with songs like ‘Blinded by You’ borrowing the pop focused elements of THE HUMAN LEAGUE while ‘The Art Of Evasion’ recalled imperial TEARS FOR FEARS...

“….The second band were complete unknowns to me, but, like Kenelis, had been specially invited by Saffron to provide support for the night.  Tenek took to the stage and moved the night on from the opening heavy rock to something more electronic with a powerful dance orientated drum foundation.  I maybe hadn’t come across them before but I was very impressed with their flawless performance and will be keeping eyes and ears open for future releases from them (in addition to exploring their back catalogue).  Not being familiar with the band all songs were clearly new to me and with unknown titles, but one song name did stand out (as well as being a great song) and that was ‘Another Day’, one of the tracks contained on the CDs that I came away with.  During Tenek’s set, my suspicions about the plain black back wall behind Kenelis were confirmed as the wall was now displaying the band name in large illuminated lettering, displaying yet another aspect of the excellent facilities within the venue to help enhance the audio visual experience.”

Added to the tenek archive, we’ve created a compiled selection of past interviews and reviews by The Electricity Club (TEC) which can be found at the below links.